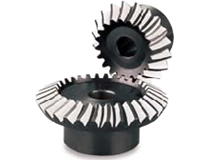 What is a bevel gear?

A cone-shaped gear having a cone as its pitch surface with gears cut along its surface is called a bevel gear. Two shafts crossing each other at a point are called intersecting shafts. Bevel gears belong to this type of intersecting shaft gears that are used to transmit rotational motion between them. The angle of intersection may be any angle, but it is generally a right angle.  The general efficiency of bevel gears is about 98 to 99%.

When the tooth is along the generating line of the cone (perpendicular line connecting the apex to the base circle), it is called a straight bevel gear.  Straight bevel gears are relatively easy to make and have simple shapes.

This is bevel gear with a curved tooth form. Compared to straight bevel gears, they have larger contact surfaces with resulting smoother, less noisy rotation.  They are suitable for high-speed heavy load operations but the production process is more difficult.  Also, the twist of the tooth form produces thrust load which requires attention. Spiral bevel gears are classified by the tooth cutting method and tooth form into Klingelnberg form (Germany) and Gleason form (US), but the Gleason form is now the mainstream.

A pair of gears with the same number of gear teeth that transmits motion between the two right angle shafts are called miter gears.  They are often used to change the direction of rotation without affecting speed. Miter gears also come in straight and spiral teeth. There are also special angular miter gears which have shaft angles other than 90 degrees.

Hypoid gears are sometimes used in automotive rear wheel drives and have cone shapes.  They could be considered to be a type of spiral bevel gears.  However, because the pinion shaft is offset from the large gear shaft, they are classified as non-intersecting shaft gears.

KHK stock bevel gears are available in two types, spiral and straight tooth, in gear ratios of 1.5 through 5, and are offered in a large variety of modules, numbers of teeth, materials and styles.

High strength, abrasion-resistant and compact for high-speed & torque use.

Reasonably priced ground gear, yet remachinable except for the gear teeth.

Ready to use without performing secondary operations. Strong and abrasion resistant.

Large nos. of teeth and modules are offered in these affordable spiral bevel gears.

A spiral bevel gears with a helix angle less than 10°. Receives forces from the same directions straight bevel gears rec…

Suitable for food machinery due to SUS303\'s rust-resistant quality.

MC nylon products are light and can be used without lubricant.