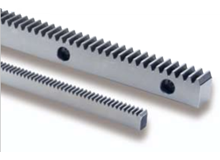 Racks are portions of a cylindrical disk with an infinite radius which has involute shaped teeth cut into its face. Racks mate exclusively with spur gears which have the same module, pressure angle and preferably face width. KHK offers gear racks in many materials, configurations, modules and lengths. One unique feature of our racks is that most are supplied with finished ends. This type of production allows for multiple racks to be butted, end-to-end, to produce one continuous length of rack. Many of the products that we offer allow for secondary operations such as reduction of the length, the adding of tapped holes, or the application of heat treatment. Our offering also includes products which have already had some of these secondary operations completed. These products are identified by a "J" in their part number and they are available within 10 calendar days.

The straight tooth cylindrical gear for which the radius of the pitch cylinder is infinite and in a bar form is called a gear rack. If it is sorted by the positions of the gear shafts, it belongs to the parallel shaft category. The spur gear that meshes with a gear rack is normally called a pinion.

Besides gear racks with straight line teeth, there are helical racks which have slanted teeth. Helical gear racks are paired with helical gears, but because of the slant of the tooth direction, as in helical gears, the mesh produces axial thrust forces.

Among the gear racks' main applications are machine tools and transport devices and when the applications involve transmitting linear motions, they are often compared with ball screws. In those cases, the main advantages of gear racks can be named such as being able to meet a heavier load by using larger modules and having no length limitation by connecting gear racks with finished ends. On the other hand, an example of the disadvantages of gear racks includes the occurrence of backlash.

When manufacturing gear racks, because of their bar shape, bending often results. In these cases, corrective processes using presses are often employed.

As for the form of gear racks, besides the usual bar shape, there are round racks in which the cross sections are circular and flexible racks which can be bent into free curve shapes.

KHK stock racks are made for high precision linear motion applications. We offer a large selection of racks ranging from module 0.5 to 10 and lengths from 100 to 2000 mm.

Has the highest strength and precision in the KHK standard rack series. Bolt holes can be remachined as carburizing is a…

This is a strong rack made of Chromoly steel, treated by carburizing. Has high-strength, high wear resistance, and enabl…

Increased strength with SCM440 material which is thermal refined.

This gear rack has the same tooth height and face width sizes, more compact and reasonably priced in comparison to SRF …

Suitable for food machinery due to SUS304 material\'s rust-resistant quality.

Made form MC nylon, can be used without lubrication.

Convenient in applications where the rack has the reciprocal motion. S Type is easy to install.

Same dimensions as SRO racks, except in stainless steel. Use where rust-resistance is required.

Excellent products with high precision and strength, and low noise and abrasion characteristics.

Effective in reducing noise and vibration due to larger contact ratio of helical gears.

Used in applications due to its flexibility, where metal racks do no have this attribute. Pinions and accessories are al…