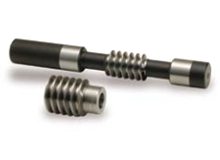 Worm gears are one type of gears that transmit motion between non-intersecting and non-parallel shafts. Their shaft angles are generally 90 degrees. Historically, worm gears were already recorded by Archimedes around 250 B.C.

There are roughly two types of worm gears. One is a worm in cylindrical form meshing with a worm wheel, the pair comprising a "cylindrical worm gear", and the other an hourglass form worm and its mating worm gear called "hourglass worm gear". The worm is generally cylindrical and therefore, unless there is a special need, cylindrical worm gear is simply called worm gear. Also, a worm with two or more threads are called multiple thread worm.

If a worm gear is used, a large speed reduction can be obtained in a compact space compared to using spur gears. Generally, the worm is used to turn the worm wheel. However when the lead angle is especially small, the worm wheel can not turn the worm and it is called its self locking feature. This can be used effectively in some applications but it can not be called perfect preventative for reverse driving. (When the lead angle is large, it is possible to turn the worm with the worm wheel.) In addition, there are many advantages to worm gears such as low noise and vibration, but because of the large sliding at the tooth surfaces (sliding contact), the efficiency is low. (For cylindrical worm gears, the general efficiency is about 30-90%.)  Also, there are disadvantages such as they tend to suffer from tooth surface heat seizure.

Ordinarily the lead angles of the right and left tooth surface of a worm are the same. However in duplex worm gears, they are made so that the tooth thickness of the worm changes continuously in the axial direction so that by shifting the worm axially with shims, it becomes possible to adjust the backlash.

As for the materials for worm gears, for worms: structural carbon steel (S45C, etc.), structural alloy steel (SCM415, etc.), stainless steel and cast iron are used; and for worm wheels: cast iron (FC200, etc.), nonferrous metals such as phosphor bronze and specialty bronze (nickel bronze, aluminum bronze, etc.), engineering plastics such as MC Nylon, etc.  Because the combination of materials for worms and worm wheels affects the allowable transmission force and lubrication methods, the choice of mating materials requires careful consideration. Also, related to the friction of teeth, a harder material for worm than worm wheel is generally used.

The simplest way to obtain a large speed reduction with high torque in a compact space is with worm gear drives. KHK stock worms and worm wheels are available in modules 0.5 to 6 and in speed ratios of 1/10 to 1/120, made in a variety of m0aterials and styles. We also offer stock duplex worms and worm wheels with which you can obtain a very low backlash, high rotational precision system.

High-precision duplex worms with superior strength. A range of backlash values can be obtained by moving the worm axiall…

Duplex worm wheels made of aluminum bronze, excellent in wear-resistance. The pitch accuracy is first grade.

Grounded finished worms with a shaft, including tooth surface quenching treatment. Allows compact design due to having s…

Made of aluminum bronze, have excellent wear-resistance. Wide selection is available for this item.

Made of aluminum bronze, have excellent wear-resistance. Allows compact design.

Economical, commonly used worm wheels that have broad utility. Available with a large selection of modules and number of…

Rust-resistant worms made of stainless steel suitable for mating with DS or PG worm wheels. Finished products for the J …

Light weight and strong MC Nylon worm wheels. Suitable for use in food machinery, and can be used without lubricant.